This piece of work seeks to provide the reader with in-depth knowledge of humanistic psychology, starting with a table of content, it defines humanistic psychology, the third force of psychology as an important contribution to the history of psychology. It then proceeds forward to looking into the lives of its major contributors namely Abraham Maslow and Carl Rogers. Moving forward, it explores various humanistic theories with their criticisms and lastly, it ends with some interesting facts for the readers.

What is Humanistic Psychology?

Humanistic Psychology is the third force of psychology. It is a perspective that emphasizes the whole individual and gives importance to concepts such as free will, self-efficacy, and self-actualization. It strives to help people reach their potential and help them in self-actualization that is maximized to their fullest potential.

It assumes that people are basically good, and they are motivated to self-actualize. It focuses on subjective experiences rather than objective ones. It rejects scientific methodology like experiments and typical uses of scientific research. Humanistic psychology rejects the study of animals as it does not suggest anything about human behavior according to them.

In the early to mid-1900s, there existed only two viewpoints namely, psychoanalysis and behaviorism. An individual could be either a psychoanalyst or a behaviorist. There were not any other major viewpoints to rival these two. Behaviorism was seen as a mechanical theory -stimulus goes in, a response comes out.

Some professionals began developing a 3rd read that primarily focuses on people’s ability to direct their own lives. This approach owes way more roots in philosophy than in biology and physiology. Humanists stated that individuals have power, the liberty to decide on their own destiny. Two of the earliest and most noted founders of this are Abraham Maslow (1908-1970) and Carl Rogers (1902-1987). 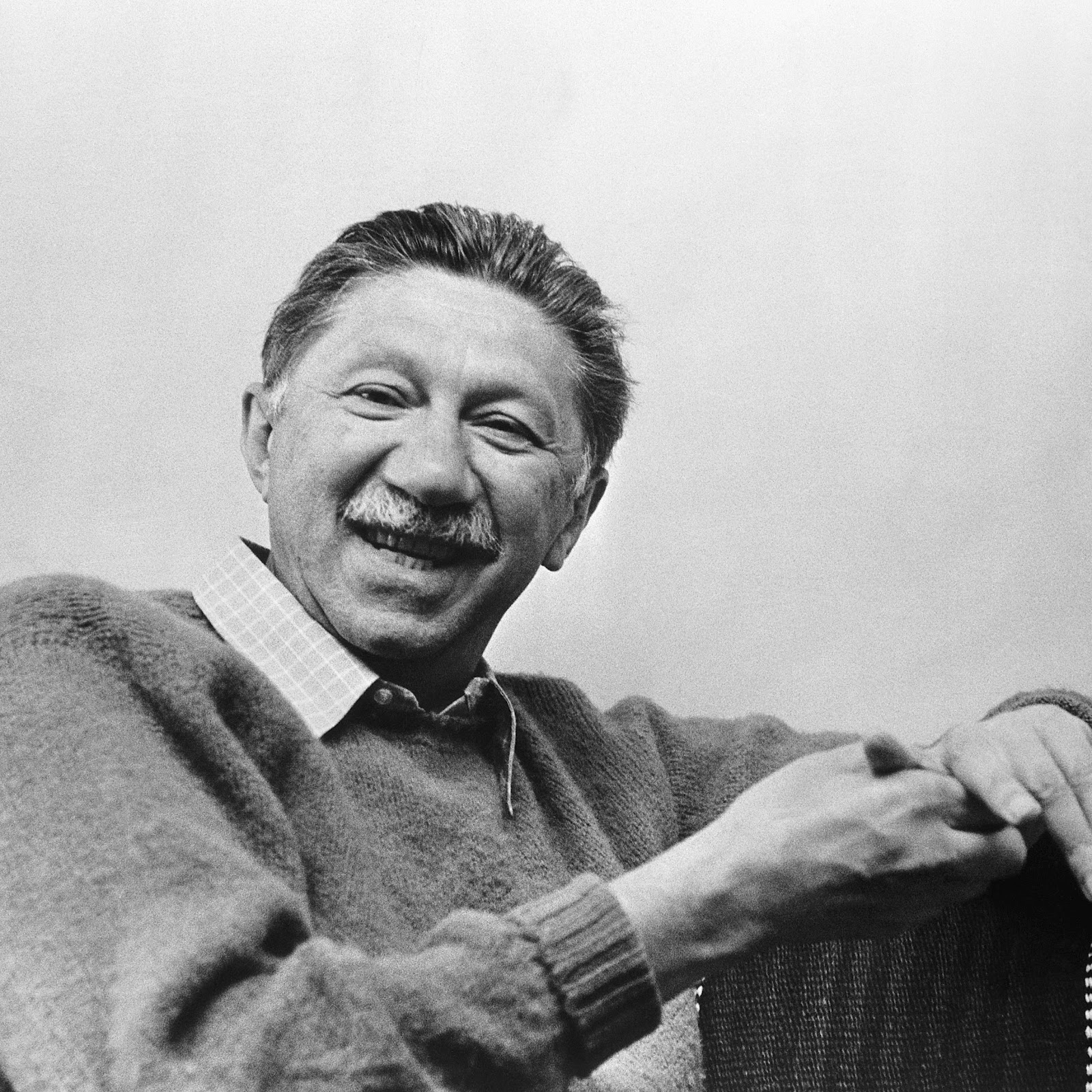 Born in 1908, Abraham Harold Maslow was an American psychologist. He is best known for creating a hierarchy of needs, a theory that gives importance to human needs and self-actualization. His theory suggested that people have several basic needs that should be met before moving up to the hierarchy to pursue self-actualization needs.

Maslow is best known for the hierarchy of needs, humanistic Psychology, and self-actualization i.e., our ability to reach our highest potential.

Maslow was born in 1908, in a Jewish family of seven children who migrated from Russia. Later, he described his childhood as sorrowful and lonely. Before pursuing psychology, he studied law at the City College of New York. But later, his interest in Psychology led him to pursue a bachelor's, master’s, and doctorate in Psychology from the University of Wisconsin. 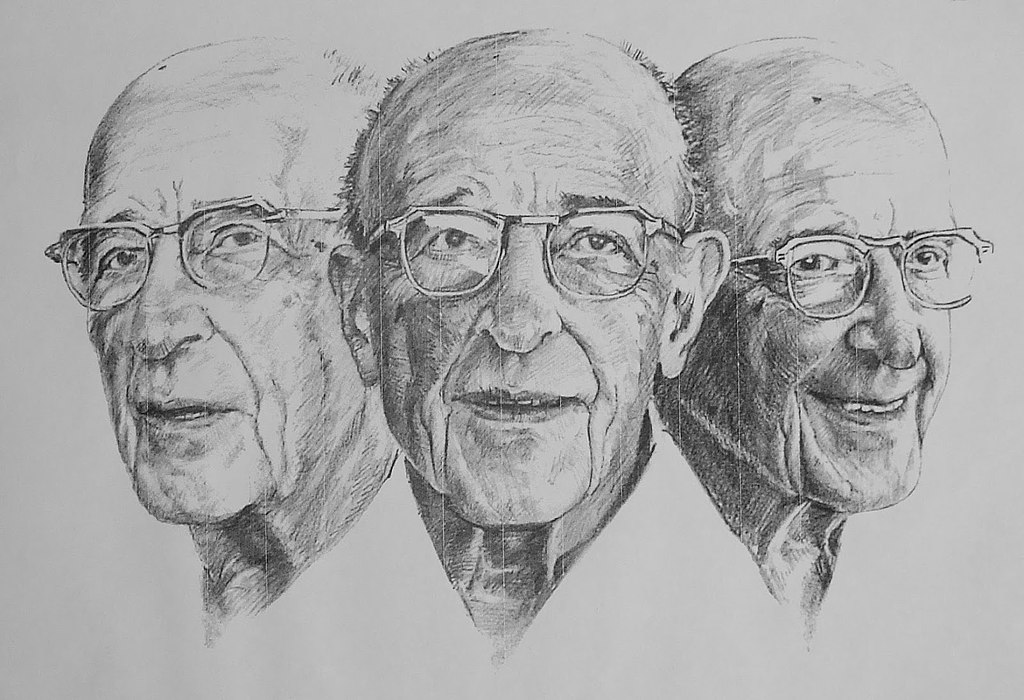 Carl Rogers was born in 1902 in Illinois. His mother was a housewife and his father, a Civil Engineer. He was an overachiever from a really young age. 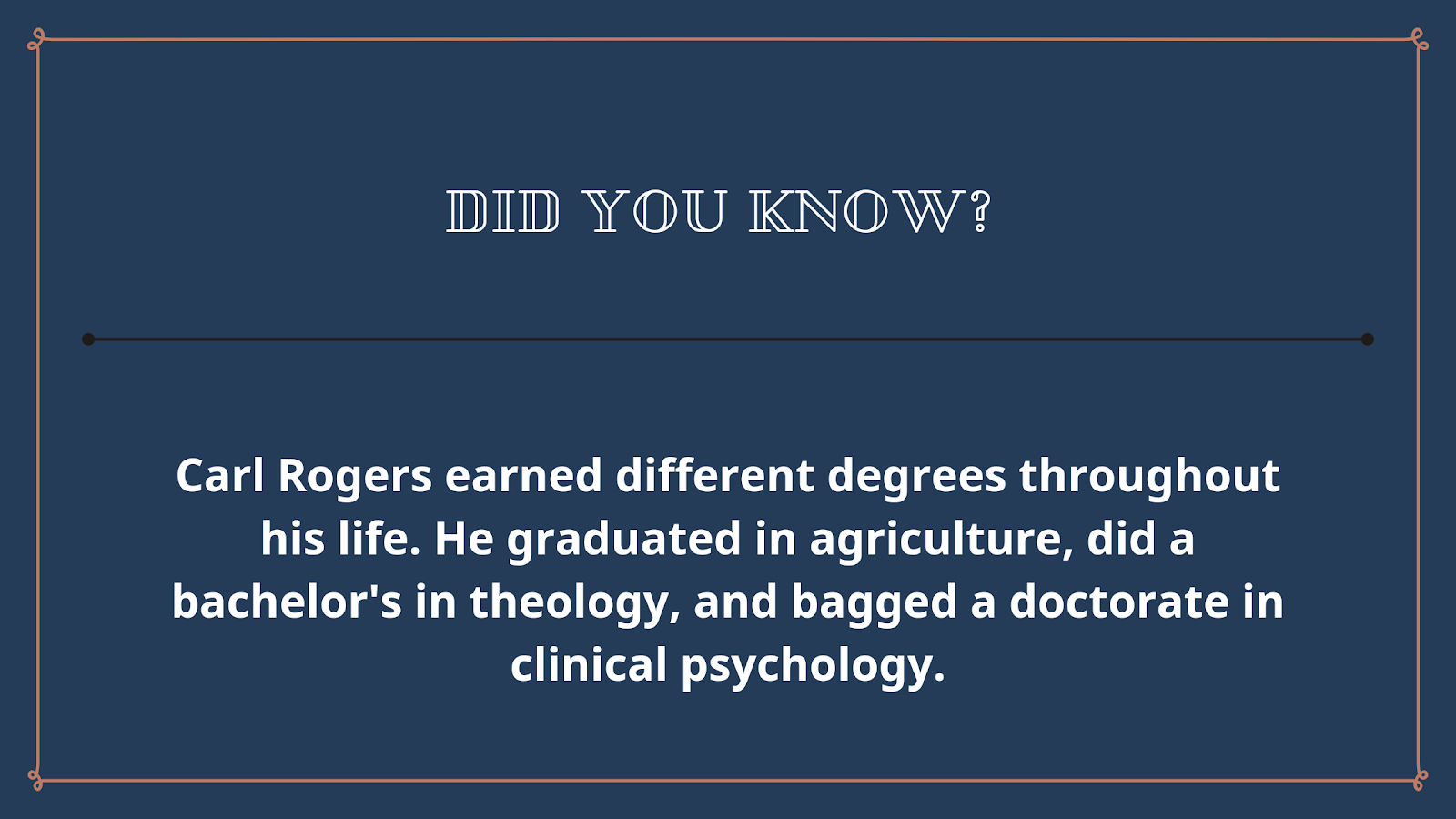 Hierarchy of Needs by Abraham Maslow

Abraham Maslow proposed a motivational model in 1954. He believed that psychology ignores an individual's ability to strive for personal growth. He introduced the concept of a hierarchy of needs. In the hierarchy, deficiency needs are at the bottom, and growth needs are at the top. 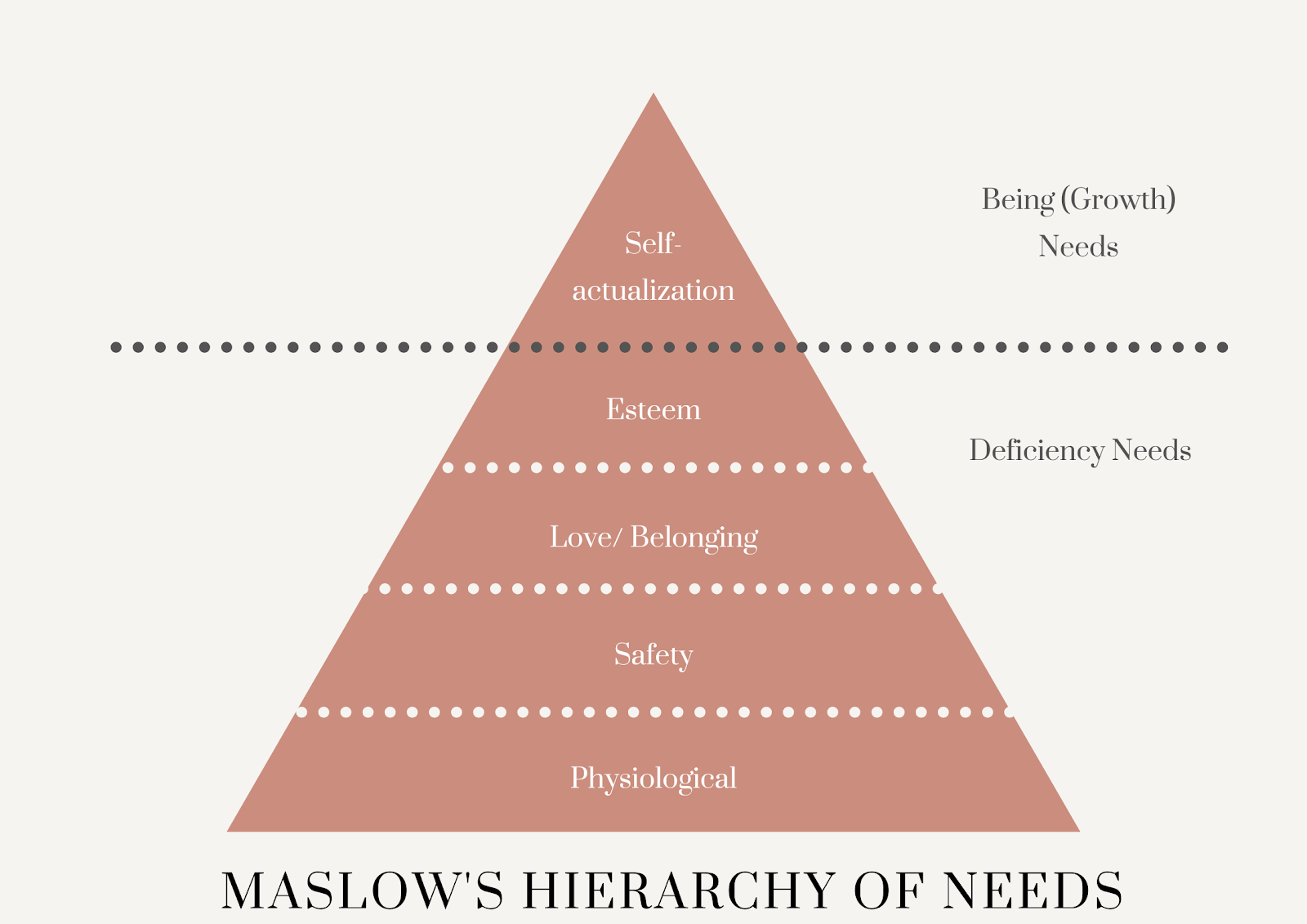 •Deficiency Needs: needs of the body such as the need for food and water.

•Growth Needs are for desires like having friends or feeling good about oneself.

The theory is generally rigid in the hierarchy but Maslow noted that the needs may not always occur in the given hierarchy. They may keep changing from one person to another. For example: For some people, esteem needs are more important than belonging needs, or esteem and physiological needs are the only superior ones. This suggests that the needs are not always satisfied in a hierarchy.

These needs are basic needs, necessary for human survival and the progression of its species.

After the fulfillment of physiological needs, individuals progress to safety needs. Safety needs are nothing but the need to feel safe and secure and out of danger whether it be financial security, health and wellness, or safety against injury or accidents. It includes the need for shelter as well.
3. Belonging and love Needs:

Esteem needs are the need for appreciation and respect. When the lower order needs in the hierarchy are fulfilled, there is a prominent need for self-esteem and personal growth. An individual needs to feel that they are valued and making contributions to the world.
5. Self-actualization Needs:

It is the peak of Maslow's hierarchy. When all the lower needs are fulfilled, people can strive to reach their fullest potential.

Cognitive Needs: It includes the need to know and understand. To explore, need for meaning and predictability.

Carl Rogers' Concept of Self

Rogers believed that forces that direct us are within us and that if they are not blocked or distorted they can guide us to self-actualization.

Self is the central concept in Rogers' theory. It is an organized, consistent set of perceptions about oneself. 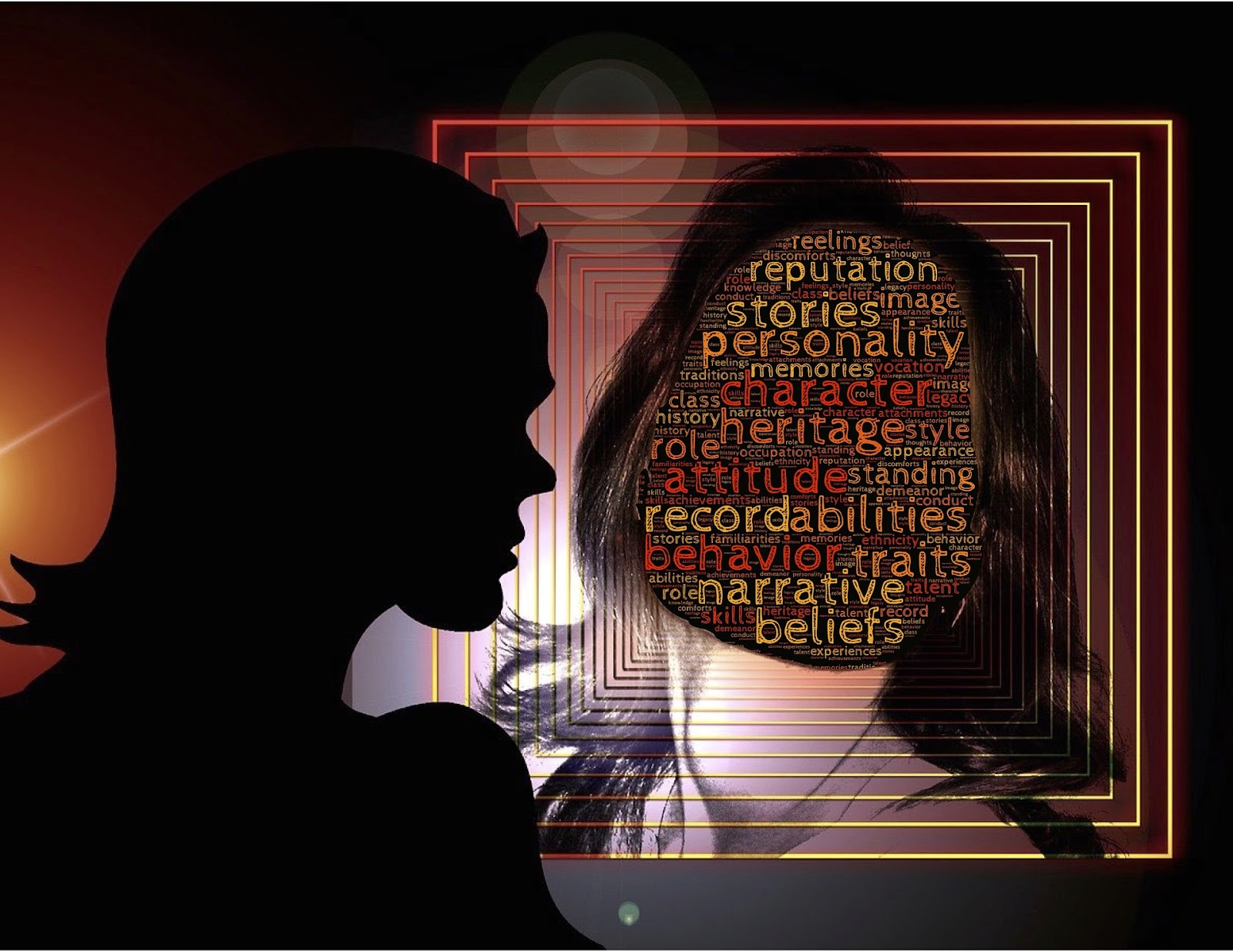 Any inconsistent event evokes anxiety. A well-adapted individual will respond to this anxiety by modifying the self-concept, but other people choose to deny their experiences to eliminate incongruence, a strategy that can lead to problems in living.

The degree of congruence between self-concept and experience helps define one's adjustment level. The more rigid and inflexible one's self-concept is, the more maladjusted one would become.

The Need for Positive Regard

According to Rogers, we are born with an innate need for positive regard that is acceptance and love from others. He viewed positive regard as important for healthy development.

Unconditional Positive Regard: According to him, people are worthy of respect and love regardless of their behavior and accomplishments.

People need positive regard not only from others but themselves too. The need for positive self-regard i.e. the desire to feel good about oneself.

Rogers believed that conditions of worth can hold down people and cause major incongruence among self and experience.

According to Rogers, such people have an inner sense of freedom, self-determination and choose to move in their direction of growth.

Rogers believed there are three necessary and sufficient conditions of counseling : 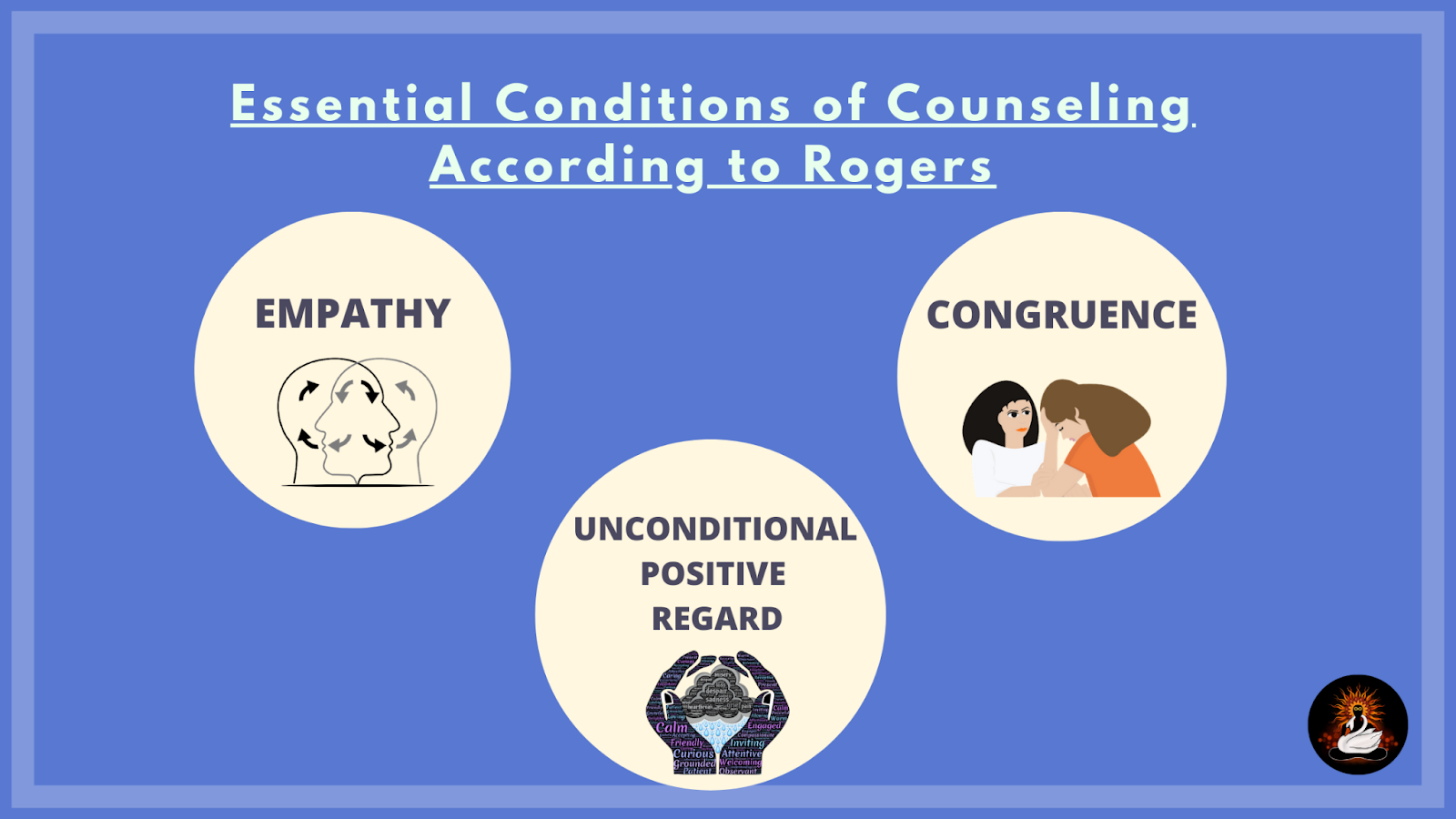 In therapeutic situations, empathy is primarily concerned with the counselor’s ability to feel the client and convey this understanding back to them. This may be done in multiple ways. Empathy may be subjective, interpersonal, or objective.

Unconditional Positive Regard is also known as acceptance, is a deep and genuine caring for the client as a person.

Congruence is the condition of being transparent in the therapeutic relationship giving up roles and facades. It is the counselor’s readiness for setting aside concerns and personal preoccupation and being available and open in relationship with the client.

Collectivist societies, such as India, which emphasize community needs and interdependence, may struggle to identify with humanistic psychology's ideals and values.

Gloria Szymanski was the client in this film. Gloria was 31 years old when the sessions were taped; she had split six years before, and her daughter, Pammy, was in fourth grade when Gloria married for the second time in 1968, only to divorce ten years later. At the age of 46, she died of leukemia. Pamela Burry, Gloria's niece, later wrote a book called "Living with the Gloria Films: A Daughter's Recollection". 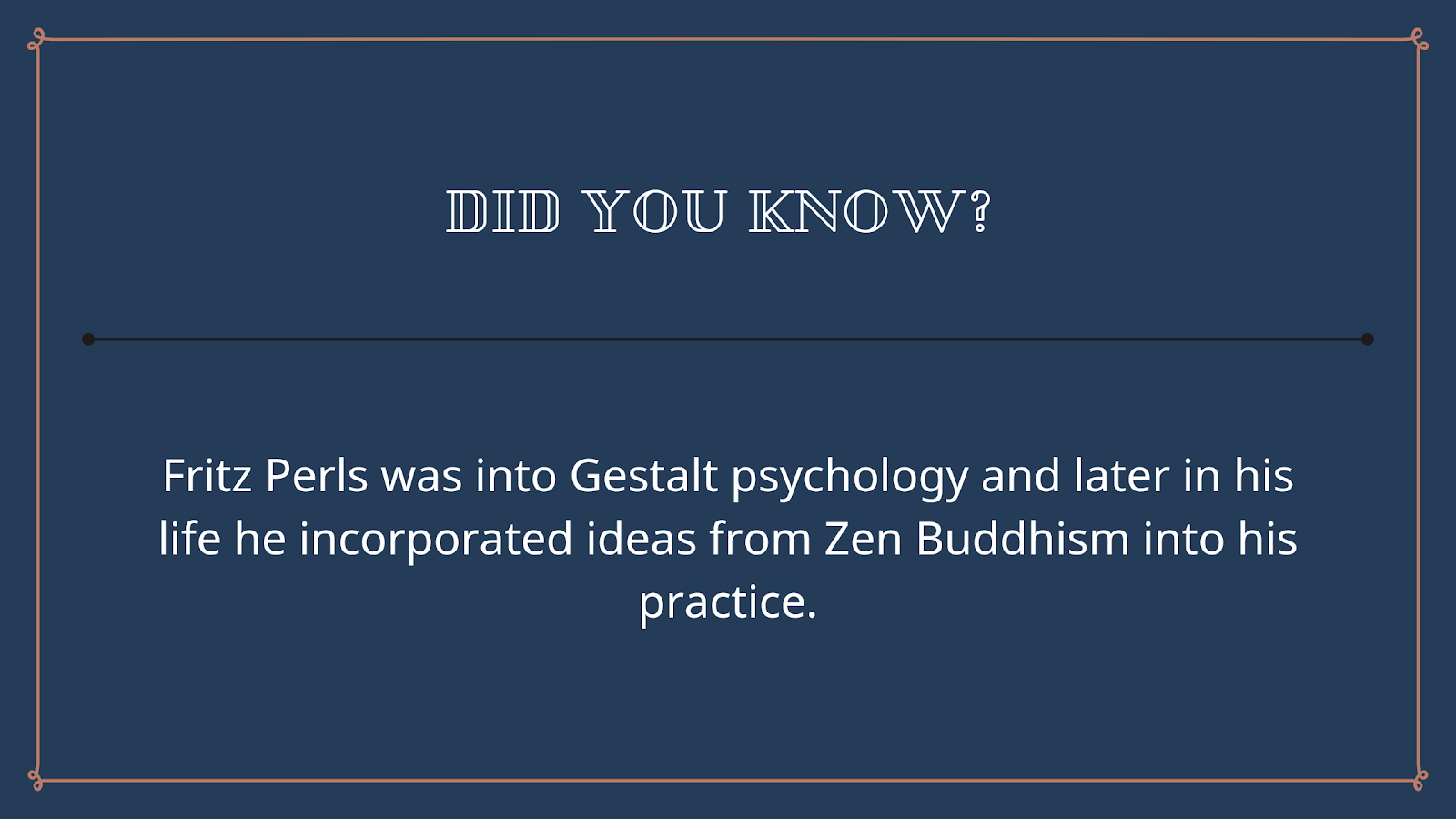 With Fritz Perls- Click here to watch the video.

With Carl Rogers- Click here to watch the video.

With Albert Ellis- Click here to watch the video.